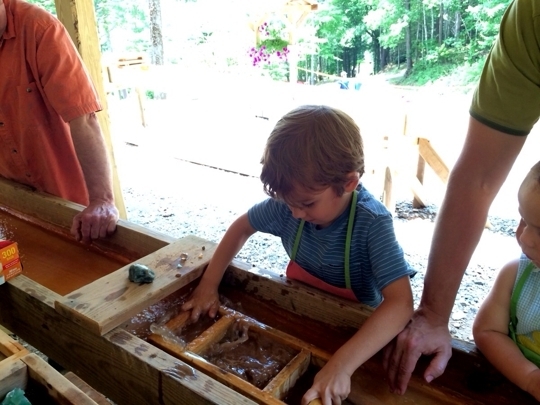 Booking.com
Save on a nearby hotel with the lowest rates
Book Now
VIEW NEARBY
+9
more photos 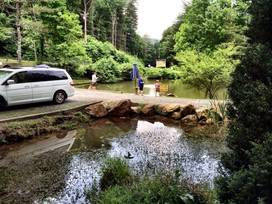 1 Review of The Lilly Pad Village


The Lilly Pad Village is an haven in the mountains of Blue Ridge where kids can engage in several nature activities just right for them.  We enjoyed gem mining and mini-golf.  Other activities are available, as well.

GEM MINING
We visited in late spring with our two boys - almost 6 and almost 2. The weather was just perfect for a series of outdoor adventures. We started at the gem mining station, where our boys shared a small bucket of dirt.  They were each given an apron to keep their clothes dry (thank you!)  My big guy used a spade to heap a scoop of dirt onto a screen, then rinsed it with the flowing water in the mining trough.

Every scoop delivered several gemstones of varying sizes, which helped to keep my oldest thoroughly engaged through the entire bucket.  We used laminated identification sheets along the trough to determine the names of the gems we found in our bucket. Some were more difficult to identify than others, but the staff was friendly and helpful the entire time. Their trained eyes helping to ensure we learned about each treasure we encountered.

The two-year old wasn’t as interested in finding gems as he was in shaking the dirt through the screen, and he had just as much fun!  My only regret was not getting a larger bucket of gems. In fact, on our way home from Blue Ridge, my oldest said that the gem mining and ride on the Blue Ridge Railroad were his two favorite parts of our vacation.

The gem mining is not just for young children.  We were mining with kids as old as about 12, who appeared to be having just as much fun as our young-ones.  There were even a few adults getting in on the action.

Once all of our gems were discovered, packed into bags, and securely stored in mom’s backpack, we gently coaxed them from the gem mining area to the mini-golf course.

MINI GOLF
This course was unlike any I have ever visited; it was a 9-hole course in a natural setting, winding through the towering pine trees.  My son’s only complaint was that it wasn’t long enough! He had a blast at each hole.

I appreciated the various size clubs, so both boys had one perfect for their height.  Because the course is along a nature trail in the woods, it isn’t stroller accessible. Parents toting babies will want to bring along a sling.

We watched a number of kids fishing in the catch-and-release pond.  It was an especially popular spot.

Adventures at The Lilly Pad Village are priced individually, and discounted packages are also available.

The main building (where each activity is purchased) includes a small gift shop with a few snacks, sodas, and ice cream.  They also sell a few wares such as gem soaps and jewelry.

BOTTOMLINE
We will be back to The Lilly Pad Village, especially for the gem mining.  I highly recommend it for families visiting Blue Ridge.  Kids as young as two, and as old as 200, will have a fun time there.

Disclosure: Thank you to The Lilly Pad Village and Fannin County Georgia for hosting my family and me.  We appreciate the complimentary activities, but it in no way swayed my opinion. All comments here are my own.