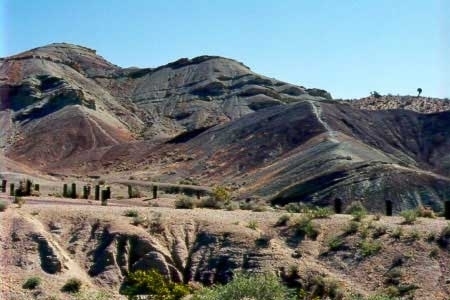 Out of this world


Once you’ve filled your gas tank (and your tummy tank), it’s time to leave civilization behind again. You won’t miss the sounds of the city one bit as you head north on Irwin Road, out of Barstow, and enter the realm of Rainbow Basin, a national natural landmark, where the colors of the rainbow decorate gorge walls housing an inestimable quantity of fossilized remains that are ten to thirty million years old.

And may the force be with you as you drive through the rock-strewn, other worldly landscape of Owl Canyon, where the movie Star Wars was filmed. If your kids don’t know R2D2 from C3PO, this would be the place to fill them in.

The Bureau of Land Management (BLM) field office in Barstow (760–252–6091) administers Owl Canyon; general location: 8 miles north of downtown Barstow, off Irwin Road. The canyon is open year-round and free, although there is a $6.00 fee for primitive camping sites. Activities to enjoy include bird-watching, camping, hiking or backpacking, picnicking, rockhounding or gold panning, scenic driving, and wildlife and wildflower viewing.