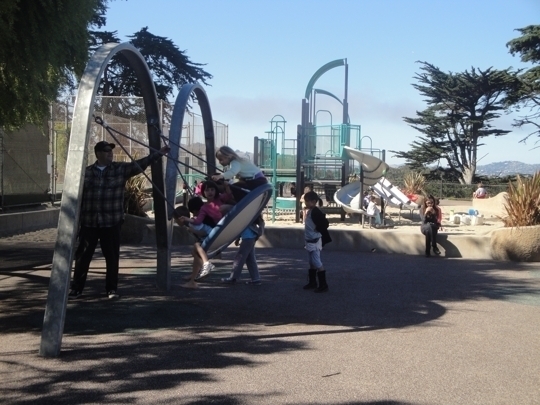 Play in the Shadow of the Golden Gate


Situated along the southern border of the Presidio, Julius Kahn Park and Playground has one of the coolest backdrops of any playground around.  The iconic red towers of the Golden Gate Bridge loom over the tree tops.  Without them it would be easy to forget that you were in the city!  There's plenty of open space to play with nearby soccer fields and tennis courts.  The playground equipment offers kids of varying ages abilities the chance to climb, swing and burn off energy.   My son is very partial to the rope pyramid that can also be spun around on its axis.  My daughter seems to split her time between the structure that could pass for a suspension bridge model and the spinning bucket seats.  (Honestly I don’t know where these two get their propensity for spinning!)   There’s a clubhouse and picnic area alongside the playground, both can be reserved for functions like kids’ birthday parties.

Just below the main playground area are a lot of learn and play opportunities where visitors can explore the Tennessee Hollow Watershed and the hiking trails connecting to it.   Signs of the park’s reforestation efforts are everywhere!