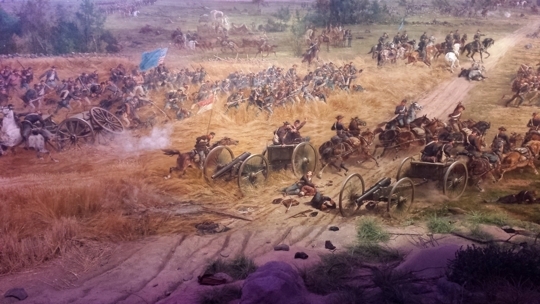 Booking.com
Save on a nearby hotel with the lowest rates
Book Now
VIEW NEARBY
+6
more photos 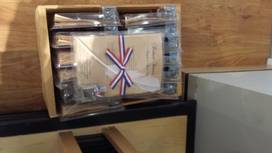 Can Get Ridiculously Crowded


During a weekend at near peak Fall color and 70 degree weather, we were driving through Gettysburg to visit some friends. My husband had been wanting to visit for a while, and I kept putting it off "till the kids are older." Now I feel even more strongly that we should have waited till our 4 and 5 year old were a few years older.

This is the only museum at a National Park that I have ever been to where National Park Pass holders have to pay to go in. While active military are free, military dependents do not receive a discount. The museum is run by the Gettysburg Foundation, not the National Park Service.

We decided to do the cyclorama (with the movie beforehand) and the museum. The movie is well done, but I felt that it was definitely most appropriate for older kids - maybe age 8 and up. There were several injured and dead soldiers shown on the video. I know that it's a battlefield, but we have seen videos at other battlefields - like Fort McHenry - that were very well done and managed to be accessible for all ages. This video tended to use complex wording where simpler explanations would have been just as meaningful.

The cyclorama is very loud and can be very crowded. We ended up leaving as soon as the explanation of Pickett's Charge was over because our four and five year old were scared. They both have seen a real cannon fire, and they thought it was interesting - the cyclorama just terrified them. They both had to be carried out. I think the crowds bothered them at least as much as the noise.

Needless to say the kids weren't in a great mood for the museum. But, we still walked through - it's huge. There are several videos in the museum, so if you just go to the museum and skip the movie/cyclorama, you can still get a good idea of what happened at Gettysburg. For kids who can't read - there is little to do in the museum. In a region filled with great hands-on history museums that really cater to all ages (such as the museum at Mt Vernon), this museum really falls short and is a disappointment. It does appear to have great artifacts and written explanations. The first five or six rooms that we walked through were so crowded that we couldn't get close enough to the exhibits to read them without waiting our turn. There were relatively few touch screen computers compared to other museums that we have visited in the region.

We saw lots of young children (ages 3-6) at the museum with their families - I'm not sure that I saw any that were actively engaged in a museum exhibit.

I think that ultimately if we had visited when it was less crowded, we would have had a more enjoyable visit. Our friends, who are local, told us when we arrived at their house that we were crazy to go anywhere near Gettysburg on a weekend in October.

If you want to visit this area in the fall, go on a weekday. And, if you are planning to visit with young children, plan to spend as much time as possible outside driving around the battlefield rather than in the museum.


We visited this museum after we had already gone on a tour of the battlefield, and it really helped to bridge it all together and give us a good picture of the battle. The museum is more than just exibits, it also offers a film (my 2 & 3 year old sat through it) and Cyclorama, which is an amazing 360 degree painting completed in 1883.

Following the film and cyclorama viewing, we toured the museum area. I was concerned my young children wouldn't be engaged, but interactive exhibits as well as information about the soldiers day to day lives and activities kept them interested. I couldn't help but think about how awesome this place would be for children learning this in school or homeschooled - this is way more than anyone can learn from a history book, and very important for our country too.

After going through, we headed over to the gift shop and grabbed some great unique souveniers. Had we been hungry, the snack bar at the entry way would have been very convenient.

We have already discussed bringing the kids back in the future when they are older. We will stop here before the battlefield tour next time!

Disclaimer: I was hosted by Destination Gettysburg. All opinions expressed here are my own.

The Cyclorama and Intro Film

I honestly couldn't remember much from school about the significance of Gettysburg, nor the details of what happened there for 3 days in July of 1863. The film was engaging, not too gory, and was appropriate for all ages. It helped all of us understand the history. After we watched the film, we went upstairs to see the cyclorama which was housed in a round room with accent lights. This is a very large painting made over 100 years ago and is very large and high. There were lots of people in the room so even though you could be around the room, it was hard to see it all. We encouraged our kids to sneak past taller adults to stand at the rail. Then the dramatic presentation began with story, sound effects, and light effects on the painting.

After the demonstration, there was about 5 minutes to spend viewing the painting and then the lights dimmed again and we were ushered out of the room.  We were disappointed to leave so quickly but I'm sure they have to move people through or else they couldn't handle all the people who want to see it.

The fee we paid included admission to the museum, and although I know it would have been excellent, we didn't want to spend a lot of time there or take our kids through it. We saw some of the artifacts on display and then went through the gift shop. Outside we found a picnic area near the parking lot to eat our lunch. Thankfully it was in the shade on a very hot day.

Special note: There is a NPS Information Desk with Jr. Ranger booklets. We were only given a couple books for our group of 12 kids... they wanted us to do it as a group. The questions were involved and difficult and required spending time in the museum or really listening to the cyclorama and film information. Although the kids found it difficult, and they really didn't finish all they needed to, the ranger was gracious at the end of the day and awarded them all badges. And not just the plastic kind, but a fabric patch commemorating the 150th anniversary of Gettysburg.